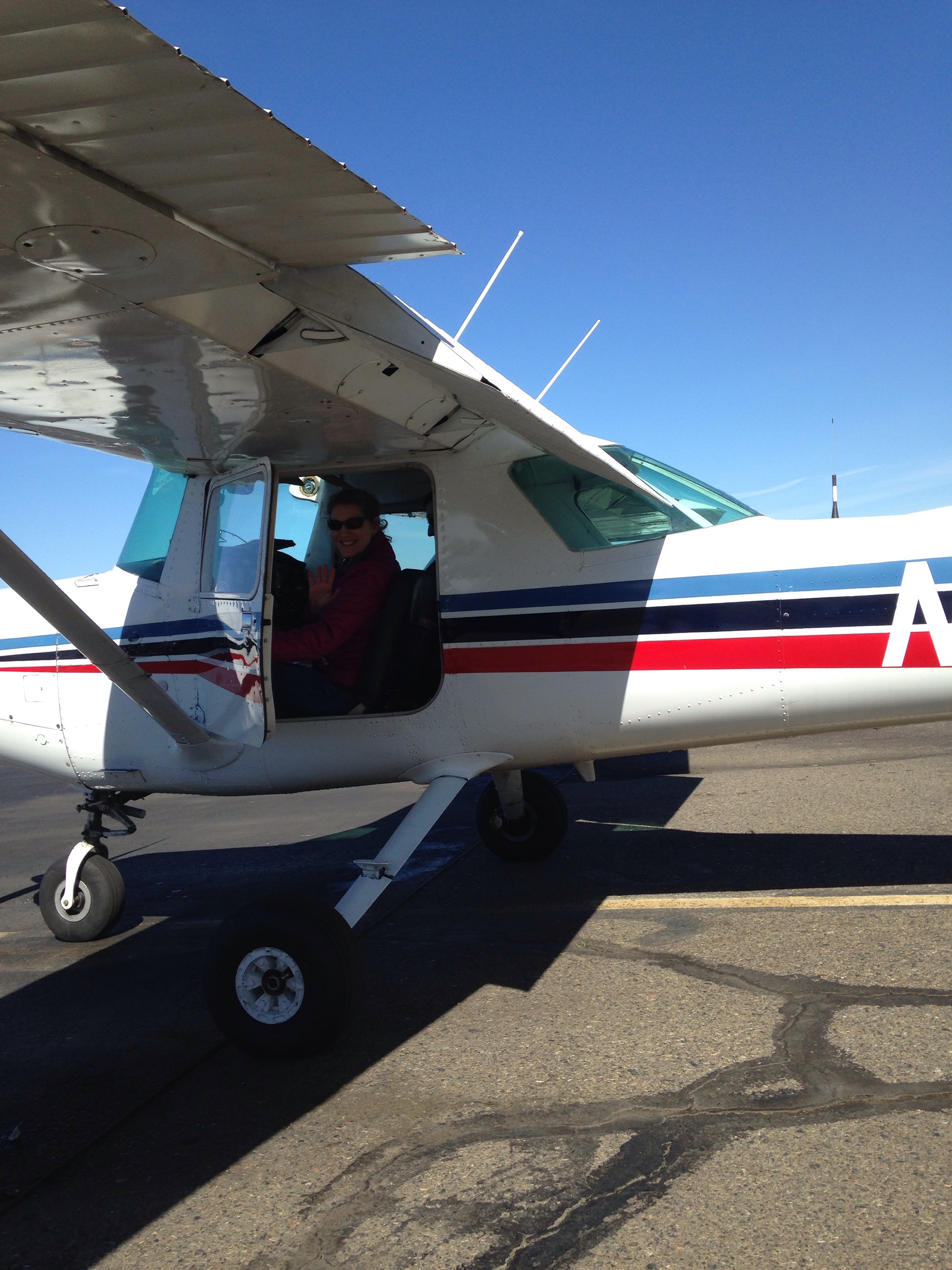 On our way out to Scappoose

Pinch me! Not because I forgot to wear green on St. Patrick’s Day, but because I can’t believe I finally soloed!

I’m going to do something here, something that is somewhat against an unwritten code of conduct among pilots. I’m going to tell the truth about how bad my first solo went. Fear not! I still want to fly airplanes.

The winds were gusting at my home airport, grounding all students that wanted to solo. That is why my CFI and I flew to a little uncontrolled airport on the other side of the mountain range where the winds were calm.

From there I showed him three take offs and landings in the pattern, and he got out, gave me a speech about never being afraid to do a go around at any point, and sent me on my way.

I taxied down to the end and waited my turn (when it’s beautiful out, everybody goes flying). When I was up, I announced my intentions to the local traffic and pulled out onto the runway.

And there I sat. For longer than I intended.

The plane before me was doing a touch and go, and for whatever reason it barely looked to be moving. So I sat and waited. Slowly…ever so slowly it climbed up above the runway. Then it occurred to me, “I’m sitting on the runway of an uncontrolled airport on a busy day…this is really stupid.” Surely the plane in front of me was far enough ahead. After all, I’m in a Cessna 152, I move about as fast as a flock of geese.

I didn’t really take off as much as jump straight up into the sky. In the blink of an eye I was 700 feet and climbing at 108 knots and still had half of the runway in front of me. This didn’t add up. “I’m suppose to rotate at 60 knots and climb at 70 knots….hmmm….well, let’s pull the power back if I’m climbing too fast….WHAT! NO! FULL THROTTLE FOR TAKE OFF!” So I did the next thing I knew to do when I’m too high, pitch down. This, of course, only made me go faster and not really descend at all. I was now going much, much faster than a flock of geese. Or that bald eagle straight ahead of me. Or the other Cessna that now looks to be much much closer to me than it was a minute ago!!!!

The other Cessna turned crosswind and I decided to extend my upwind a bit to put some distance between us.

What the devil?! I’m gaining on the other Cessna again. Are they flying backwards?! “Hmmm…I’m already at pattern altitude…and then some…I’ll pull back my power, descend back to 1,000 feet, wait for them to turn downwind, and extend this leg too.”

Then the other Cessna didn’t turn. At all. Ever.

I was quite a distance from what should have been my downwind leg turn when I realized the other Cessna was also gaining altitude and …. wait for it…now it clicks…they’re leaving the pattern! Which of course means I too have left the pattern.

I made the radio call, I turned downwind(ish) and made more of a triangle than a square back to the airport.

For a brief moment I took it in. The wind, the sun on the water, the bald eagle, the snow-capped mountains. Then it was time to begin my descent.

You guys, this was the BEST descent I have EVER had. It was b-e-a-utiful. Everything was executed by the book, the approach was perfect. I was smiling the whole way down. This was gunna be pretty. My power was pulled all the way back, the runway was assured, I hadn’t missed a beat from carb heat to radio calls to flap notches. I put the belly right over the center line, caught the ground effect and started my flare.

Here is the problem: I climbed.

I climbed a lot and really fast without realizing I was doing it. For a moment there was that “hmmm….I should feel it touch down soon” and then there were trees in my peripheral vision…and I was going up the trees. “Oh, well, let’s drop the nose a little.”

Wrong answer. The runway came at me. Really really fast. I attempted to flare again…and then I landed. Fairly hard, but it wasn’t over. I was airborne again. Then another BOOM back down, then airborne again.

What the flip was happening?! I couldn’t land the damn thing. This had never happened before and I can’t figure out when I’m up or down!?

Ok, full throttle, carb heat in, announce a go around and get those flaps up!

The second time around I began my climb already in the air. In seconds I was above traffic pattern and going really really fast again. Forget climbing at 70 knots like I practiced hundreds of times, how’s 115 knots? My CFI radioed over to me, “so, that looked a little rough. How do you feel?”

Hmmm, do I tell him my hands are shaking, I don’t know what went wrong and I’d love to crawl into a hole and have a good cry instead of try that again?

I radioed back, “That was the ugliest thing. Ever.”

My CFI was really cool about it. Apparently it didn’t look that bad from where he sat. He said I flared too much and if it happened again I just needed to give the plane a little power and ease up on the flare.

Sure. How simple. Let me just choke back the tears and announce my crosswind turn to…well, I suppose to that bald eagle over there because I’ve scared everyone else away.

I flew the pattern again. I flew it fast and shaky knowing that runway was coming back around.

The second time I didn’t care about pretty. My only focus was to put the plane on the ground and keep it there. I’m told it was a really good landing. I’m not sure. I don’t even remember it. I was just so relieved to stay on the ground. I taxied straight to my CFI, picked him up and we headed back to the home airport. We were late getting back.

And so, thus went my first solo flight. Naturally I got back and told everyone I soloed. Everyone keeps asking me how I feel. I’ve heard many stories about how special the first solo flight is for pilots. How spiritual it is. How thrilling and life changing.

Well, frankly, mine was terrible and I’m glad it’s over.

My CFI told me something on the way back. “Now when you tell the story, tell everyone you did great. Remember, pilot’s lie.[wink]” Even my mentor confirmed that plenty of pilots do not have great first solo flights, but that pilots lie about these things. Just like fishermen lie about the one that got away.

I chose not to lie, because I have to believe there are others out there like me and it’s only fair to tell the truth so we don’t feel like giant failures for not having life-altering, soul-saving first solo flights.

I feel better about it now than I did earlier today because reflecting on it, I made some good decisions. I never stopped flying the plane – even when I was freaked out and ready to explode with tears. I announced a go around after a few bounces when I just couldn’t figure it out instead of bouncing it right off the runway. And finally, I didn’t hit the bald eagle. You’re welcome America. 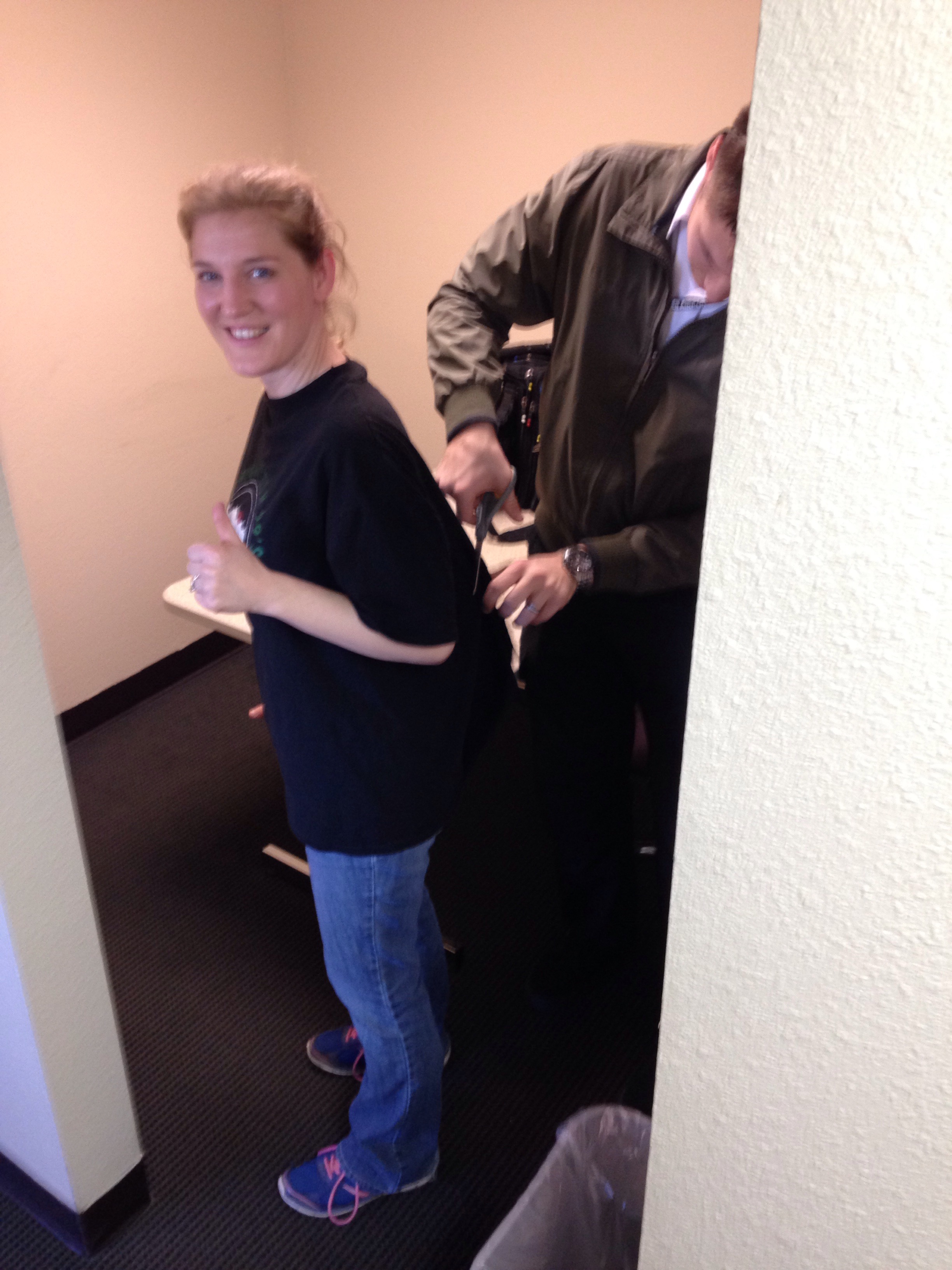 School policy prohibits cutting shirt tails…they hate fun. So we snuck off to an undisclosed location to carry on the tradition.

a channel of the Los Angeles review of books

I have issues. So do you.

"A blog about nothing." - Jason Alexander

Life as a family impacted by Cystic Fibrosis

Nature's nuances in a nutshell

Where Sarcasm Gets Drunk and Let's Its Hair Down

Photos of the Great Lakes State

Every day is an adventure

Coffee For The Mind, inspiration for the soul!

Immersive Tales for the Curious Traveler

The Minimalism Project - a 365 day purge!
Everywhere Once

An adult's guide to long-term travel

DIY, Perfume, Travel and Writing in the Pacific Northwest